TPC has begun in-person worship again. We will not have Sunday School or Wednesday Nights at this time. We also continue to offer Online Worship (found under the "Online Worship" link in the menu).

John was born in amazing town of Starkville, MS where he was educated at Starkville High School as well as Mississippi State University. After receiving his undergraduate degree he served, for three years, as the Director of Youth Ministries at First United Methodist Church in 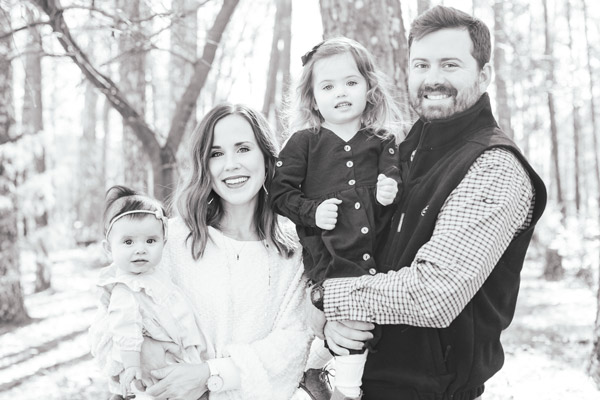 Corinth, MS. This time in Corinth was so helpful in confirming John’s call to the Christian ministry, and in 2012 he began the Masters of Divinity program at Reformed Theological Seminary in Jackson, MS.  While in seminary, John was privileged to serve on staff at Madison Heights Church PCA, in Madison, MS and ministered to middle and high school students.  2017 was a big year for John, his first child, a daughter, was born, he graduated from RTS, and was ordained as a minister in the Presbyterian Church in America. During the summer of 2018 John had the incredible opportunity to return to Corinth to serve as the pastor at Trinity Presbyterian Church.

John is married to Molly, a native of Tishomingo, MS whose beauty and skill on the piano is only surpassed by her love for Jesus Christ and care for others.  John and Molly have a daughter named Louvie, who was born in May of 2017 and a daughter named Mabel, born in July of 2019.

John enjoys all things outdoors, his favorites being golfing, snow skiing and camping. The mountains truly are his happy place.

The three priorities of John’s ministry are: first, to clearly preach and teach the gospel of Jesus Christ from the Scriptures; second, to engage in relational ministry and gently shepherd his flock; and third, to find ways the love the city of Corinth, that the love and light of Christ might be seen.